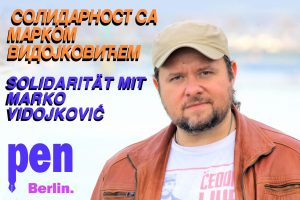 Berlin, January 12th: PEN Berlin observes with great concern the increasingly violent radicalization of the Serbian public. Citizens critical of the government, writers, and journalists are put under massive pressure and receive death threats. In recent years, at least four well-known journalists have been murdered, but the crimes have never been solved.

The situation has become particularly unbearable for bestselling author Marko Vidojković. The prominent campaigner for democracy, civil society, and freedom of expression has become the target of top politicians, who have repeatedly publicly branded him a „traitor“ who must be „removed from the public eye“. As of today, he and his wife have been threatened over a hundred times to murder them, even to the point of „dismembering“. For security reasons, Vidojković now lives almost continuously under a self-imposed curfew.

Vidojković, who already was a vocal opponent of the Milošević regime, has always struggled for a Serbian civil society. He continues to publish his podcasts and newspaper articles undeterred despite the constant attempts to intimidate him. Vidojković denounces a Serbian society that glorifies war criminals such as Ratko Mladić, does not recognize the Republic of Kosovo, supports the Russian war on Ukraine, and has made the denial of the Srebrenica genocide a reason of state.  But his criticism is also directed against the EU, which in his opinion does not exert enough pressure on Serbia.

We call on the political leadership of Serbia under President Aleksandar Vučić to finally curb hate speech, and to investigate and punish death threats such as those against Vidojković. It is unacceptable that the government of a country that wants to join the EU tolerates or even uses such methods to silence critics.

We call on the EU and the German Government to make Serbia’s political leadership responsible during the accession negotiations.

We express our solidarity with Marko Vidojković and offer him our help, together with PEN Slovenia.

PEN Berlin – We stand by our word