Press release: Fire trucks to Kharkiv – We have delivered 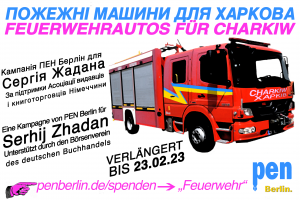 In the Kharkiv region in eastern Ukraine, the Russian army has largely destroyed the infrastructure since the beginning of the war. Even after liberation last September, the people lack everything, but especially water, electricity, and heat. When the delivery was handed over, the temperature in Kharkiv was 10,4 degrees Fahrenheit; it can get even colder there in winter.

Serhij Zhadan will now send the fire trucks with the water-tanks and generators to where they are needed most: the large generator can supply an entire hospital or school, for example, while the smaller ones meet the energy requirements of a residential building and could power warming rooms for many people, including media use and cell phone charging. The first site will be Kosacha Lopan, where Russian occupation forces left mass graves and a devastated infrastructure.

The charity action was initiated in November by writer Ralf Bönt and publicist Liane Bednarz, in cooperation with PEN Berlin, of which both are members. “It was important to me that this action makes a difference beyond morality and gestures of solidarity, but technically. By now it is so big that it does,” says Ralf Bönt. Deniz Yücel adds, “Because they do it, we do it. Because the Russian aggressors are attacking infrastructure, we are trying to deliver mobile infrastructure according to our means.” “We have to do everything we can to support the Ukrainians in their impressive fight for freedom,” says Liane Bednarz.

A few initial donors (Fam. Sebastian Pape, PPI AG, Pape Invest, Hapag-Lloyd, DFB Stiftung Egidius Braun) brought one fire truck within reach right at the start. In the meantime, countless other, mainly private donors have more than tripled the initial sum – by the beginning of January, around 167,000 euros had arrived at the PEN Berlin account. The campaign is therefore being extended – with the kind support of the Börsenverein des Deutschen Buchhandels – until February 23rd. By then we hope to be able to send a second, similar transport to eastern Ukraine.

Our thanks go to Ambassador Oleksii Makeiev and the Embassy of Ukraine in Berlin, who supported us with great dedication in handling the shipment, to the Berlin Senator of the Interior Iris Spranger and the Berlin Admissions Office for quickly providing the transfer license plates, as well as to Klaus Hoppe, Gerd Kellershohn, Andreas Jürgens, Daria Konoh, Tatjana Ohm, the translator Svitlana Stupak, and the truck drivers Michael Bockelkamp and Dennis Metzler for indispensable technical, organizational, linguistic, and unpaid help. We would like to thank Gennady Zhadan, who accompanied our team from Lviv to Kharkiv, and his brother, Serhij Zhadan, for the admirable efforts he has made for almost a year in the civil defense of his hometown Kharkiv. And a very big thank you is due to the private donors, some of whom have transferred amounts in the four-digit range.

PEN Berlin – We stand by our word.