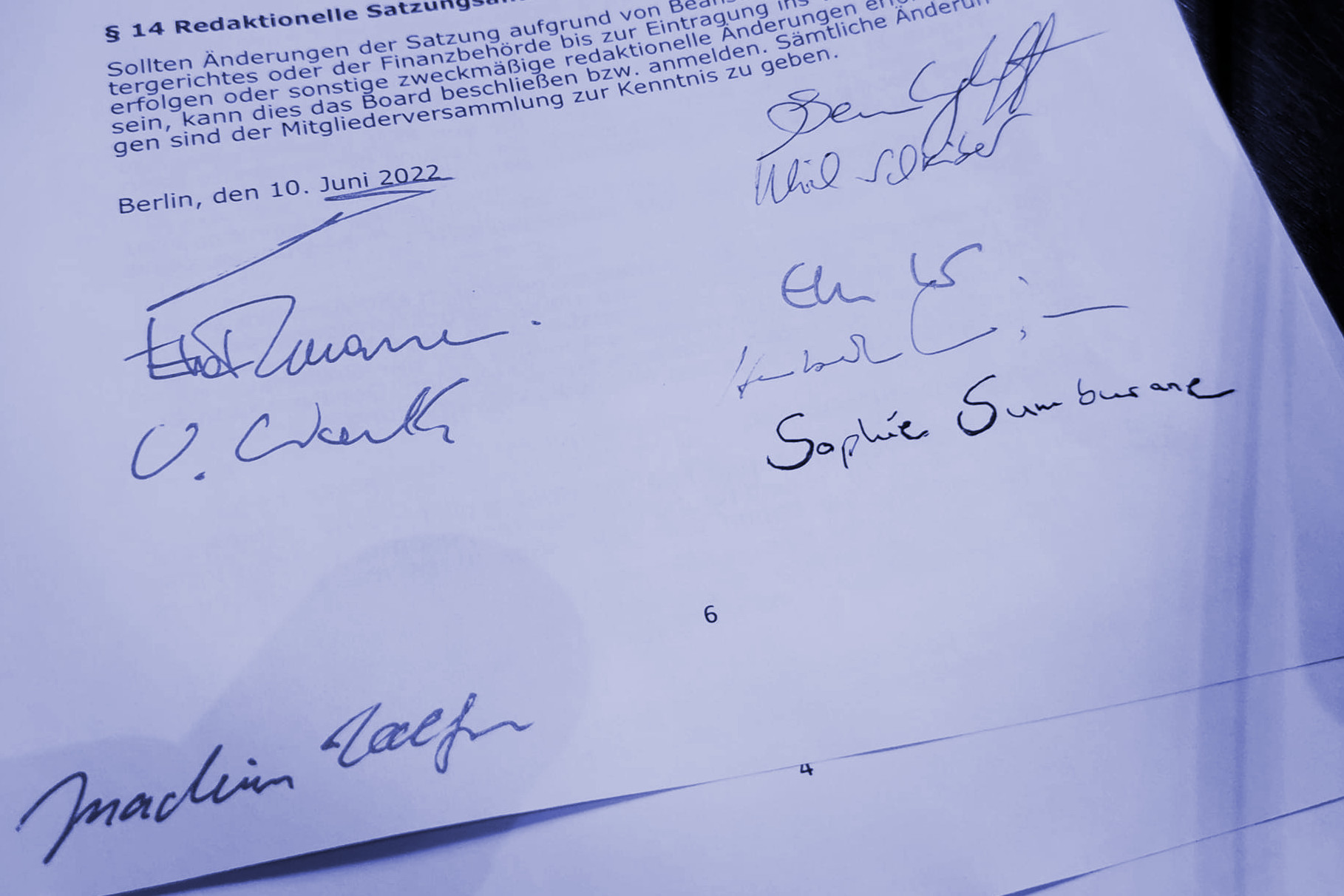 § 1 Name, registered office and financial year
1. The association bears the name PEN Berlin e.V. and is based in Berlin. It is registered in the register of associations at the District Court of Charlottenburg.

2. The financial year corresponds to the calendar year.

§ 2 Purpose of the Association
1. PEN Berlin is an association of writers of all literary genres who either write in German or live in in German-speaking countries; of publicists, translators, and people who have rendered outstanding services to literature or who stand up for the freedom of the word in a special way. PEN Berlin is a member of PEN International.

2. The purposes of the association are the promotion of art and culture and the help for politically, racially, or religiously persecuted people, in particular authors, including charitable purposes to their benefit.

3. PEN Berlin operates in accordance with the Charter of the International PEN. It stands for cultural diversity and is fully committed to artistic freedom and diversity of opinion. In particular, it advocates for authors who are threatened, persecuted, and hindered in their freedom of expression for political or religious reasons, because of their gender, sexual orientation or identity, or ethnic origin.

4. The purposes are realized through events such as readings, lectures, discussions or rallies, as well as through publications. The association helps distressed and persecuted authors from all over the world, if possible also economically, by organizing and granting residency scholarships, as well as by providing journalistic and personal help with settling in Germany and in the German literary public. Financial support is only granted to persons who meet the requirements of § 53 No. 2 AO.

5. PEN Berlin supports the work of PEN International, in particular its committees. In the spirit of the PEN Charter, it promotes freedom of speech and the idea of tolerance.

§ 3 Non-profit status
1. The association pursues exclusively and directly non-profit and charitable purposes defined in § 60 in conjunction with Annex 1 to § 60 AO, §1 (2).

2. The association is active selflessly. It does not pursue predominantly self-economic purposes.

4. Surpluses achieved by the association may not be paid to the members. They are to be used exclusively for the aforementioned charitable purpose.

§ 4 Ordinary membership
1. PEN Berlin stands for a participatory membership that actively contributes to the interests and goals of the association beyond its organs. There is no legal entitlement to admission to the association. With the beginning of the membership, the obligation to pay the contribution arises.

2. For ordinary membership of PEN Berlin, one of the following requirements must be met:
• the publication of literary works of considerable quality, or
• a journalistic activity with a lasting supra-regional reach, or
• other outstanding services to literature or to the freedom of speech.

3. The procedure of becoming a member begins with the reasoned proposal to the Board for the admission of a new member.

4. The Board reviews the requirements for membership and proposes the candidates it endorses to the General Assembly for election.

5. The election of a new member takes place by the General Assembly in a non-public secret ballot. Anyone who receives more than half of the votes cast is eligible. Confidentiality must be maintained about the voting process.

6. Election shall take effect upon the signing of the Charter of International PEN by the Member.

2. Membership as a supporting member takes place by declaration of intent to the Board and its acceptance by the Board.

3. Supporting members are invited to the general meeting but have neither the right to vote nor the right to stand as a candidate. Legal persons shall designate a representative.

4. Supporting members pay an annual fee, the minimum amount of which for natural and legal persons is determined by the Board.

a) by death of the natural person or dissolution of the legal person;

b) by written notice to the Board at the end of the year with a notice period of September 30th of the year;

c) by removal from the list of members as part of the simplified exclusion procedure. If a member does not pay his or her contribution for two years without sufficient justification, the Board shall declare that membership rights will be suspended and shall notify the member thereof in writing. If the arrears of contribution are not paid within six weeks, it is assumed that the member renounces his membership. This will be communicated to the member. In the absence of an objection, the Board shall determine that waiver by resolution and notify it to the Member.

d) by exclusion for good cause, in particular in the case of conduct damaging to the association. If a member is accused of violating the Charter of PEN International or of having seriously damaged the reputation of PEN Berlin by at least seven other members, the Board shall appoint a committee of five members of the Association, to which no member of the Board may belong. That body shall examine the allegations and give the member concerned the opportunity to comment. It informs the Board and reports to the General Assembly in closed session on the outcome of its deliberations. The General Assembly decides on a motion by the committee for the exclusion of a member in closed session with a two-thirds majority of the votes cast. The member must first have opportunity to justify him/herself.

§ 7 Financing of the Association
1. The association is financed by membership fees, donations, grants from the public sector, as well as by the income from the formation of reserves.

2. The General Assembly decides on the amount of the membership fees. These can be regulated in a contribution regulation.

§ 8 Organs
Organs of PEN Berlin are:
a) the General Assembly
b) the board.

2. The Ordinary General Assembly is convened once a year by the Board.

3. An extraordinary general meeting is to be convened if:
a) the interest of the association requires it, by resolution of the boards,
b) at least ten percent of the members request this in writing from the board.

4. The General Assembly must be convened with a notice period of at least thirty days. All club communication is permitted in text form.  The general meeting can be held in digital form. The board decides on the way in which the general meeting is held. The agenda set by the Board shall be communicated together with the convening. Agenda motions must be submitted to the Board three weeks before the meeting. The thus accordingly supplemented agenda must be communicated to the members no later than two weeks before the meeting. Motions for resolutions, annual reports and reports of the Board are sent to the members with the agenda.

6. The General Assembly has a quorum of at least ten percent of the ordinary members. In the event the quorum is not met, a further meeting with the same agenda will be convened after four weeks at the earliest, at the latest after eight weeks, which will then have no a quorum.

7. In particular, the General Assembly has the following tasks and decides on:
a) the agenda,
b) the assembly chair,
c) the approval of the Annual Report of the Board,
d) the relief of the board,
e) Amendments to the statutes,
f) the appointment and dismissal of the members of the Board,
g) the election of members,
h) the exclusion of members and honorary members,
i) motions,
j) the appointment of at least two auditors
k) the determination of membership fees,
l) the adoption of the budget,
m) the adoption of association regulations,
n) the dissolution of the association.

9. In urgent cases, the Board may arrange for a written vote among members by circular procedure. This does not apply to resolutions on membership, amendments to the statutes or the dissolution of the association.

§ 10 The Board
1. Only ordinary members of the association can be elected to the board. This consists of:

1a. The association can give itself rules of procedure governing elections. The General Assembly decides on the adoption and amendments.

2. The number of members of the Board to be elected is determined by the General Assembly on the proposal of the incumbent Board. The board and the offices of the spokespersons are to be filled equally by gender.

3. The Board is appointed for a term of two years. The General Assembly appoints an election commission to lead the election process. The speakers are voted for individually. The function of spokesperson may be exercised for a maximum of three terms of office. With the termination of membership in the association, the office of the board member also ends.

5. As a collegial body, the Board conducts day-to-day business and is responsible for the implementation of the resolutions of the General Assembly. It decides by majority vote. The members of the Board define their areas of responsibility and responsibilities among themselves. In particular, it designates one person responsible for Writers in Exile, Writers in Prison, as secretary and as treasurer, also as contact persons for PEN International. The Board shall adopt its rules of procedure. A managing director may be appointed by the Board.

5a. The Board may adopt its rules of procedure.

6. The Board may appoint persecuted, threatened, or imprisoned authors as honorary members. Honorary membership does not create any rights or obligations.

7. The offices of the association and its organs are generally exercised on a voluntary basis. If necessary and considering the economic circumstances and the budgetary situation, the Board may decide that association and organ offices are to be exercised for an appropriate remuneration on the basis of a service contract or against a fee. Any such resolution requires the confirmation of the next general meeting.

The General Assembly appoints two auditors who must not be members of the Board. They are responsible for auditing the entire accounting system. They review the annual financial statements at the end of a financial year. An audit report must be prepared and submitted to the General Assembly for a vote.

§ 12 Data protection
The association processes the following personal data of its members: surname, first name, date of birth, address, contact details, as well as association-related data. This data is stored with the help of EDP and used exclusively for association purposes and is protected by necessary measures from the knowledge of third parties.

§ 13 Dissolution of the Association
1. The dissolution of the association can only take place by resolution of a specially convened general meeting. A corresponding request must be announced to all members at least 30 days before the date of the General Assembly.

2. A two-thirds majority of the votes cast is required for the resolution to be valid.

§ 14 Editorial Amendments to the Statutes

Should amendments to the Statutes be made due to complaints by the registry court or the tax authority until entry in the register of associations or if other appropriate editorial changes are required, the Board may decide or register this. All changes must be notified to the General Assembly.